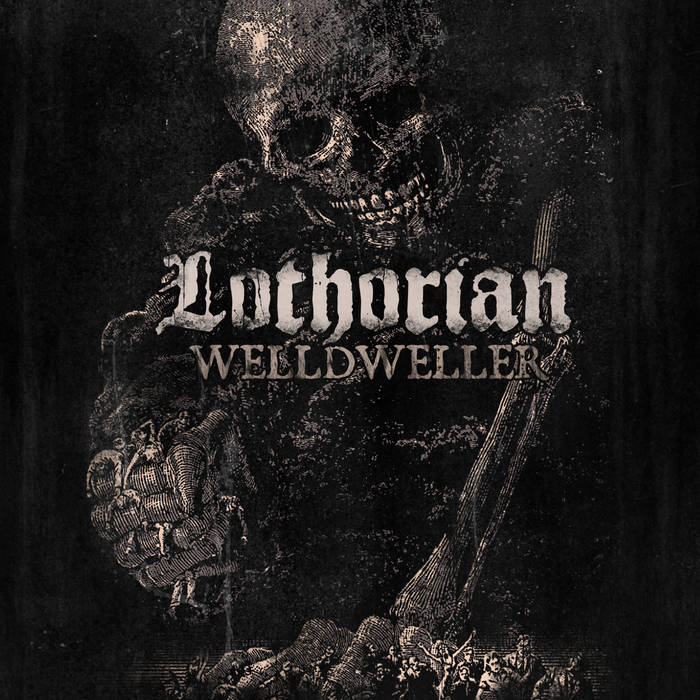 The Goon I'm a little late to this party. I got lost along the way because I kept mistaking this for a Locrian album. I finally paid attention and discovered a fantastic doom album. Dark and heavy, just the way it should be. Reverb on the vocals remind me of Monolord.

Colin M. When enjoyed at the proper (maximum) volume, this beast of an album proves just as effective as a jackhammer for reducing even the sturdiest of structures to rubble. Add to that the "Planet Caravan"-esque psych vocals and you have a true gem! Favorite track: Welldweller.

"Welldweller isn't gonna do anyone any good unless it's played LOUD. Whether it's filtered through a soundsystem or some mangled ear buds doesn't matter, really. The crushing weight of every note deserves your engrossment. Your girlfriend's gonna bitch about the footprints on the carpet. But did you really expect her to be understanding? Lothorian blend elements well-enough to clip a ring through your nose and drag you at varying speeds through the dark and the dirty. Thank you, sir! May I have another?"
HEAVY PLANET

"Their debut album - Welldweller - is a 6 song and 30 minute blast of high octane Sludge/Stoner Metal riffs with a big helping of occult based Doom riffs aided along by creepy audio soundbytes. If your a fan of Church Of Misery then your going to be right at home in your crypt here. As Welldweller is one brutal mean fucking album you won't be able to get enough of."
THE SLUDGELORD

"This band goes for the extra push with a more massive, straightforward and even catchier sound. Think Cathedral, Goatsnake, Electric Wizard and add some sludge (because why not). A wonderful musical formula of evil apocalyptic destruction. Lothorian knows how to cook with riffs, that's for sure. One of my favorite discoveries in the last couple of months, you should check these guys out (right now)."
STONEROBIXXX

"Lothorian constantly experiment with atmosphere making one wonder what the band might have next in store. Longer compositions wouldn't seem to be out of the question and the overwhelming impression is that this band has an all-time classic album or two in them. Given time and a bit more material, Lothorian could be one of thee go-to names in doom and sludge metal for years to come."
PARANOID HITSOPHRENIC

"By having just enough variety to keep it interesting, Lothorian brings another serving of tuned-down heaviness. They definitely know how to write good songs which will be embraced by a variety of audiences. Personally I'm hooked up to it. Let's see what the future will bring for this ambituous, full of potentials band."
DOWNTUNED MAGAZINE

"This album, is 30 minutes of special down-tempo heavy sludge - stoner riffs that's framed into a perfect doom motif with occasionally clear vocals and groovy drums.
This release have been superbly produced and boosts the explosive sound of talented Lothorians .
By far one of the best released we have listened these last months.
Highly recommended."
STONER VENI

"The band steps into the scene with one helluva catchy mix of sludgy aggressiveness and acid infused psychedelia. Apparently, there is a common Doom denominator in all band members but LOTHORIAN are not limited to Doom. Sludge, Stoner, Punk, Hard-Core influences are also noticeable with the Sludge/Stoner side winning some ground."
DR. DOOM'S LAIR

"BEWARE!!! This album is out to kill you! Like an evil seducer it intoxicates you, it charms your pants off with filthy doom riffs and slow, heavy, fuzzy sludge."
TEMPLE OF PERDITION

Oh, we got both kinds. We got stoner and psych.

Bandcamp Daily  your guide to the world of Bandcamp

cktrl talks about heartbreak and his new record 'Robyn'